Cougar Town season two’s second episode explores Jules (Courteney Cox) coming to terms with the fact that her son, Travis, will soon be off to college. How will she deal? Let’s just say wine may be involved. 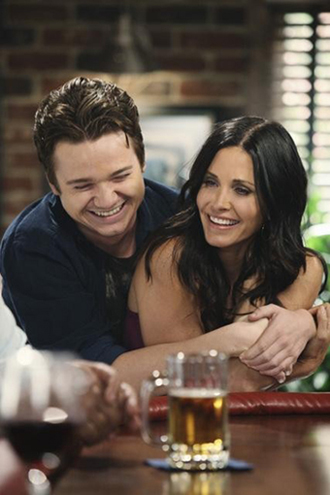 Cougar Townepisode two shows Jules (Courteney Cox) accepting the fact that her only son, Travis (Dan Byrd) will soon be going away for college. Luckily, she has her friends — and plenty of wine — to help her cope.

“You know what I love most about college?” asks Jules’ friend, Laurie (Busy Philipps). “Drinking games!”

“Wine up, everybody,” yells Jules.

Meanwhile, Laurie decides to help Jules’ ex-hubby (and stand-out star of the show!) Bobby, learn to use the internet on his “new laptop.” Considering he lives in a landlocked boat and drives a golf cart for transportation, that should be interesting! Ellie may be in for some payback when her husband, Andy, tries to deceive her with a little help from the hunky neighbor, Grayson.

This episode of Cougar Town, called Let Yourself Go, was written by Kevin Biegel and directed by Michael McDonald. Guest starring in tonight’s episode are Robert Clendenin (The Middle, Scrubs) as Tom and LaMarcus Tinker (Friday Night Lights) as Kevin.

read on for More Cougar Town