After performances from Seal and Janelle Monae and some heated discussion over whether Bruno’s criticism was too harsh of Michael Bolton, the singer became the second star to go home on Dancing With the Stars. 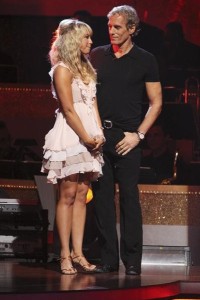 Before sending Bolton home, there was some heated debate on whether Bruno was too tough on the crooner on Monday night’s show. The judge dogged Bolton’s jive to Hound Dog, giving him a mere three out of ten points and calling it the worst jive ever on Dancing With the Stars.

“Last night, Bruno was inappropriate and disrespectful,” Bolton said. “Other than that, it was a phenomenal experience.”

Bruno, who was booed for his critique, is known for his over the top, emotional judging style. One might even say that’s why the fans love him, but it seems he went too far for many on Monday night, including the other judges, Len Goodman and Carrie Ann Inaba.

In the end, Len suggested his cohort learn to soften his criticism with a bit of support. SheKnows suggests Bruno tune in to a few episodes of So You Think You Can Dance, where the judges are always honest, yet somehow usually supportive and positive.

As angry as fans may have been at Bruno, however, they seemed to agree Bolton didn’t cut it on the dance floor. The bottom two pairs were Bolton and Chelsie Hightower and The Situation and Karina Smirnoff, who had the judges’ lowest scores, and Bolton was sent packing.

Despite all the hullabaloo, Bolton revealed he was “surprised” and “disappointed” by his exit.

The Situation, meanwhile, seemed to take his position in the bottom two seriously, promising fans he’ll step things up for next week.

In other boo-gate news, host Tom Bergeron was sure to again clarify that the other big boo-bash of the night was not in fact directed at guest mom Sarah Palin, as it seemed in the airshow. Instead, fans were jeering over the judges’ eight out of ten scores for fabo Jennifer Grey and Derek Hough.

As always, the Dancing With the Stars results show also had a host of performances, because you can only spend so much time stalling on delivering the results and dishing on DWTS performance night drama.

Janelle Monae took the stage to perform Tightrope, a single from her album The ArchAndroid. The performance got some harsh reviews, but SheKnows imagines the sound must have been off, because this songstress has serious pipes.

Seal sang Weight of My Mistakes off his latest, Seal 6: Commitment, while Chelsie, Cheryl and Lacey accompanied him on stage. His new video for Secret, off the same album, dropped today and has folks tittering over the sexy naked bed scenes with wife Heidi Klum.

This being a dance show, there was also some Cirque du Soleil style action from a crew of contortionists, aerialists and a ballerina, while quick steppers Kyle Massey and Lacey Schwimmer were the judges’ pick for an encore performance.

Today, Dancing With the Stars contenders Kyle and Lacey, The Situation and Karina, Brandy and Maksim Chmerkovskiy, Florence Henderson and Corky Ballas, Bristol Palin and Mark Ballas, Rick Fox and Cheryl Burke, Margaret Cho and Louis Van Amstel, Audrina Patridge and Tony Dovolani and Kurt Warner and Anna Trebunskaya are already back in the studio practicing for Monday night’s DWTS on ABC.