Joe Cerniglia, who appeared on Gordon Ramsay’s Kitchen Nightmares show three years ago, was found dead in the Hudson River on Friday. He apparently committed suicide by jumping off the George Washington Bridge. In a strange coincidence, another chef, 41-year-old Rachel Brown, shot herself in 2007 after appearing on Ramsay’s Hell’s Kitchen.

Thirty-nine-year-old chef Joe Cerniglia (pictured below with Ramsay) owned the restaurant Campania in New Jersey and was featured in the first series of Gordon Ramsay’s reality show, Kitchen Nightmares. On this hit reality show, Ramsay helps troubled restaurants by working with the owner-chef to figure out why the restaurant is failing and works to revive it. Ramsay isn’t exactly known for his cuddly demeanor, however, and is often seen yelling, cussing and belittling chefs on his shows. 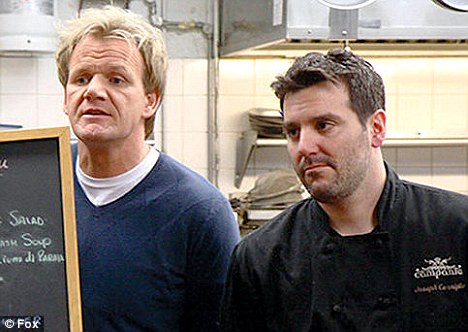 Cerniglia revealed on the show that he was deeply in debt. “I am financially in trouble. The debt of the restaurant alone is overwhelming,” he said. “My personal debt — wife, kids, mortgage — that’s a lot of debt…I can’t see us going on another year, and that’s a really scary thought. And I’m going to do everything in my power to avoid that.”

“Your business is about to (expletive) swim down the Hudson.”

At another point in the show, he asked Cerniglia: “Why would you decide to go into business if you haven’t got a clue how to run a business?”

Ramsay has since made a statement, expressing sorrow over the death of Cerniglia: “I was fortunate to spend time with Joe during the first season of Kitchen Nightmares. Joe was a brilliant chef, and our thoughts go out to his family, friends and staff.”

The two troubled chefs undoubtedly had serious psychological issues before working with Ramsay, but do you think he is too harsh on the contestants on his shows? Or do you think the chefs knew what they were getting into before appearing on the shows?

read on for More Gordon Ramsay