If you’re not watching The Good Wife, you’re missing some really fine TV. Now’s your chance to catch one of the best shows on TV as Julianna Margulies and The Good Wife are back for season two.

Fans of The Good Wife should already be primed for the show’s return to CBS tonight, but here’s a cheat sheet for those of you looking to catch up so you can jump head first into the new season. 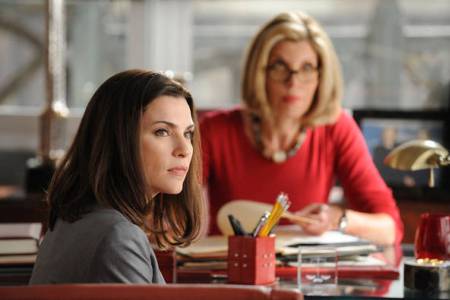 The Good Wife follows Alicia Florrick (an absolutely brilliant Julianna Margulies), the wife of Peter Florrick (the always fantastic and unrelentingly sexy Chris Noth). Peter is a former Chicago state’s attorney in prison thanks to a very public sex and corruption scandal that’s left Alicia’s life in tatters. She returns to her old job as a litigator, where there are all kinds of tough cases to fight and old colleagues to become entangled with (Alicia and Will, played by Josh Charles, who went to law school together, have been simmering for months). Alicia tries to piece together a life for herself and her two kids. Those are the basics, but the show is so much deeper and more interesting than that.

Part courtroom drama, part fascinating character study, The Good Wife was partly inspired by Eliot Spitzer’s prostitution scandal, with shades of John Edwards and Bill Clinton, and finally takes a look at the woman standing beside her man in his darkest hour.

The show’s second season promises to bring all kinds of new drama to the table with the inclusion of new characters including Twilight’s Elizabeth Reaser, who will play a love interest for Will and Michael Ealy arrives as a new lawyer joining the firm.

Get on The Good Wife bus now because by November sweeps we have a feeling it’s going to be the water cooler show, especially when Michael J. Fox guest stars as a representative for an evil pharmaceutical company, who tries to make his bosses seem more sympathetic by exploiting his own Parkinson’s disease symptoms.

The Good Wife premieres tonight on CBS at 10 p.m.