Things are looking good for Crystal Bowersox, as not only did she make it to the finals on last season’s American Idol, putting her career on the fast track, but she is now also engaged to be married to fellow musician Brian Walker. 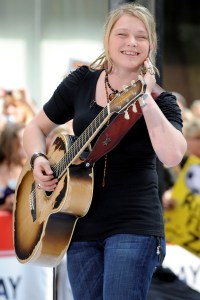 Just last May, Crystal Bowersox shared her pain with her fans on Ryan Seacrest’s radio show and Ellen DeGeneres’ talk show about breaking up with her then hometown boyfriend, Tony, mere hours before she sang her final performance on American Idol.

While that was difficult for her, Crystal explained how that experience helped her channel the emotions needed for her cover of Patty Griffin’s Up to the Mountain.

Things obviously turned around for the reality star as just four months later, Crystal Bowersox has found love again. There’s apparently no time to waste, as the single mother of a one-and-a-half-year-old, also named Tony, and Brian Walker plan to get married in October.

After just missing being crowned American Idol, the Toledo, Ohio native signed with 19 Recordings-Jive Records. Fans of Crystal Bowersox will be able to hear her debut album this fall.