Jesse Eisenberg is Mark Zuckerberg in The Social Network and his riveting performance as the Facebook founder will go down as one of the best of the year. Eisenberg is holding court at the Harvard Club in New York City and we’re there to capture his take on the cultural phenomenon that is Facebook and all that went into the making of The Social Network. 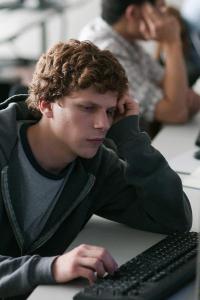 After the surprise hit Zombieland, Eisenberg immediately developed a passionate fan base that appreciates the actor’s every single fierce film performance. In The Social Network, he leads a superstar cast and crew bringing the civilization-changing entity to life that is Facebook and the Mark Zuckerberg story.

Famously, Zuckerberg was a Harvard University undergrad who created Facebook. Sure, that is the beginning, but also it is the middle, the end and somewhere in between. In Aaron Sorkin’s script, the wizard of words brings his own West Wing and A Few Good Men sharpness and coupled with David Fincher’s direction, The Social Network was all but ready to be a surefire moment in time itself.

Working with a cast of Eisenberg, Justin Timberlake and soon-to-be-Spider-Man Andrew Garfield, not to mention Trent Reznor’s magnetic score, The Social Network’s director and screenwriter have joined forces with the right cast at the right time and Eisenberg couldn’t have been more thrilled to give SheKnows a firsthand account of The Social Network.

Co-star Andrew Garfield was quick to praise Eisenberg. “For our characters, I had to see him as a brother. It was very easy to project that onto an innocent face and innocent soul,” Garfield said. “I’ve been a fan of Jesse as an actor since I saw Squid and the Whale.”

How did The Social Network screenwriter feel about his star’s performance? “By the end of the movie, you want to give Mark a hug,” Sorkin said.

SheKnows: If you could meet Mark Zuckerberg, where would you go and what would you ask him? 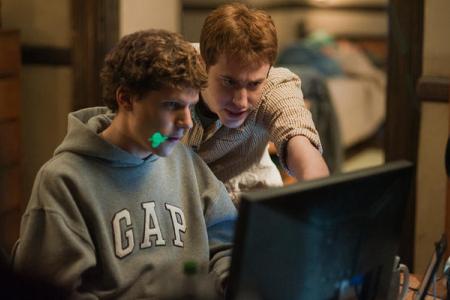 Jesse Eisenberg: I’d like to go to Johnny Rockets with Mark because I like their shakes [laughs]. I spent six months thinking about him every day. I developed a great affection for my character and by extension the man. I would be very interested in meeting him. Fortunately, my first cousin Eric got a great job at Facebook about a month before we finished shooting. I’m hoping he’ll facilitate an introduction someday. I don’t know what I would say. It’s the kind of thing that you think about all the time. I can’t imagine what that would be like.

SheKnows: Without the real person to spawn ideas from, where on earth did you go for inspiration?

Jesse Eisenberg: My impression is really formed more from the character. I don’t know the real Mark Zuckerberg. Like everybody else, I was delighted to see this very generous donation he made yesterday. I developed an affinity for Mark through filming and even through the publicity tour we’ve done. The more I think about it, the more affection I develop. In the movie, the character that Aaron created is a guy that is desperately trying to fit in and doesn’t have the social wherewithal to do so. I could certainly relate to that. Almost to cope, he develops this incredible tool to interact in a way he feels comfortable. Because of his incredible insight, 500 million other people also feel comfortable using that tool. It’s a fascinating character and complicated in all the right ways. Even though he acts in a way that may be hurtful to other characters, it’s by the end of the movie, totally understandable.

SheKnows: That first scene is pure Sorkin. When you read that on the script, did you get excited like a kid ready to play in a candy store?

Jesse Eisenberg: I saw the movie for the first time last night and had the same reaction to the first scene as when I first read Aaron’s script, even though I knew the scene so intimately. After two or three minutes of the scene, you realize it’s not going to end. It’s such a wonderful surprise. You just don’t see scenes, not only of that nuance and complexity in movies, but of that length as well. For an actor, that’s what you want. That’s what’s thrilling about working with a script like Aaron’s. An interesting anecdote is, as we’ve said, David Fincher likes to do a lot of takes. I performed that scene 99 times. He refused to do it an extra time to get 100 takes. 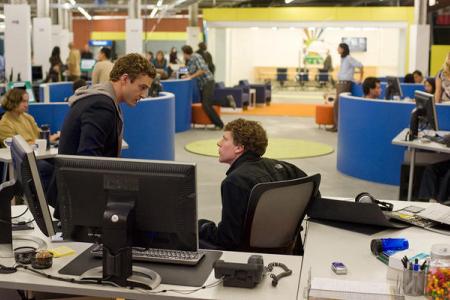 SheKnows: [Laughs] I know many films are shot out of order, how far into the shoot was that particular scene shot?

Jesse Eisenberg: It was shot on the third day of the shoot. And it was exciting for me to kind of figure out who Mark is and have two nights. We shot it over the course of two nights, to have a chance to experiment with the character. How detached is he? How is he affected by what she’s saying and how’s he affected in general by conflict.

SheKnows: You mentioned the 99 takes, having been on many sets, I would think you probably enjoy the opportunity to explore that many sides…

Jesse Eisenberg: Every actor I know would stay there all day if there was film in the camera. The alternative is sitting in the trailer, so this movie was the absolute blessing to do and we were thrilled with the amount of time we were able to spend actually acting instead of sitting around waiting to act.