It seems Lindsay Lohan’s on again-off again affairs with jail and rehab have finally gotten the better of her. Now, Lohan is heading to rehab again and this time, it’s her decision. 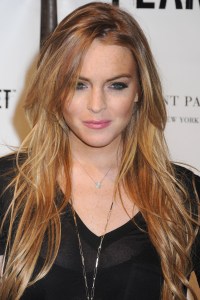 After being released from mandatory live-in rehab, Lindsay Lohan failed a recent drug test. “Substance abuse is a disease, which unfortunately doesn’t go away over night. I am working hard to overcome it and am taking positive steps,” she tweeted.

“This was certainly a setback for me but I am taking responsibility for my actions and I’m prepared to face the consequences.”

The consequences turned out to be a trip back to prison, bail denied. This meant Lohan would have to await her October 22 probation hearing behind bars. After about 15 hours, however, another judge overturned that ruling, saying Lohan deserved bail, which was set at $300,000.

Some postulate it wasn’t easy for Lohan to come up with the money after all this drama and very little work, but whatever the case, Lohan paid bail and was again released, wearing her third SCRAM bracelet.

With her new freedom, Lohan visited the Dream Center, a local Echo Park mission and outreach center for homeless teens. The troubled starlet apparently signed autographs, gave away a few handbags and hung out with the troubled teens and families.

“What a great place The Dream Center is here in LA, had a nice time there today, it’s so important to give back. I feel blessed,” she tweeted.

Of course, not even that moment of giving could be a dream for Lindsay Lohan, who can go nowhere without the cameras clicking away.

“All accept the paparazzi hitting one of the ministry guys. They need to be stopped. I think this is a job for The Terminator…” she tweeted minutes later.

Now, this morning, word is Lohan was tweeting the truth when she said she was ready to take positive steps to recovery.

The buzz has Lindsay Lohan fed up with her addiction and checking herself into a rehab center just outside of Los Angeles, today.

SheKnows hopes this is true and wishes Lohan the best of luck.