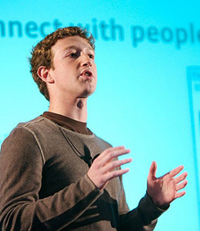 Mark Zuckerberg, who founded Facebook out of his dorm room at Harvard as fictionalized in the upcoming flick The Social Network, gifted the financially troubled Newark, New Jersey school district with $100 million.

Zuckerberg made the announcement on The Oprah Winfrey Show, albeit reluctantly — he wanted to keep the gift anonymous but Oprah talked him into going public.

“I’ve had a lot of opportunities in my life, and a lot of that comes from… having gone to really good schools,” Zuckerberg said. “And I just want to do what I can to make sure that everyone has those same opportunities.”

While Zuckerberg has no personal ties to Newark, he was touched by the city’s educational plight after meeting Mayor Cory Booker at a summer conference.

“I think that Newark is going to change the paradigm for urban education,” Booker told Oprah.

Zuckerberg, who has an estimated net worth of $6.9 billion, recognized that the Newark schools need all the help they can get: The school district has one of the worst records in the state, with only 40 percent of students able to read and write by the third grade.

Through his Startup: Education foundation, Mark Zuckerberg plans to distribute the cash over five years from privately-held Facebook shares. The school district will have to hit clear benchmarks in order to keep receiving the cash.