While Lindsay Lohan is still messed up with a drug habit and legal problems, her younger sister Ali Lohan is modeling Lindsay’s sexy new fashion line, 6126, which was inspired by Marilyn Monroe. 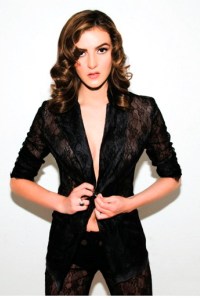 Reality star and singer Ali Lohan posed for new photos wearing a very short minidress, a low-cut coral dress, see-through tops and other skimpy clothing for Lindsay Lohan’s 6126 spring/summer 2011 collection. This has caused quite a stir.

Ali is a 16-year-old actress, reality star and singer who released her first album in 2008, All The Way Around.

Some wonder if the photos of Ali are too risque. Some conservatives say yes, that she’s too young to be wearing such revealing clothing.

Lindsay Lohan says her line is “fashion forward but also really comfortable and of high quality so that they maintain their fit and look all day and night.” She continues that the line will “salute modern women who understand that confidence can be bewitching and classic sophistication is always in vogue.”

Actress-turned-fashion-designer Lindsay Lohan’s behavior has caused her to be in and out of hot water for years. She appeared in a California court today to address her violation of probation and failed drug test. Judge Elden Fox revoked her probation and ordered her back to jail where she will be held without bail until October 22. At that time, a formal probation hearing will take place.

Lohan was handcuffed in court and taken away.

Is 16-year-old Ali Lohan too young to model Lindsay Lohan’s risque fashions? What do you think?