Singer Eddie Fisher died this week after complications from hip surgery. He was 82.

Eddie Fisher rose to fame in the early 50’s with such hits as Thinking of You and Wish You Were Here, and later headlined his own variety shows. Coke Time with Eddie Fisher and The Eddie Fisher Show were both broadcast on NBC. 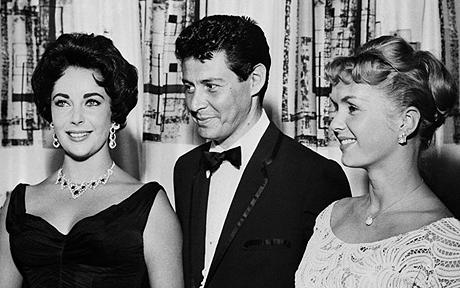 But it was Fisher’s love life that brought him the most notoriety. Fisher married picture-perfect actress Debbie Reynolds in 1955. Debbie, who starred in such classic films as Singin’ in the Rain and The Affairs of Dobie Gillis, also starred in Bundle of Joy with Fisher. The couple seemed to be the picture of 50’s domestic bliss, especially after having two babies together: Star Wars actress Carrie Fisher and son Todd.

Fisher’s perfect image came crashing down around him when Reynolds accidentally discovered her husband was having a torrid affair with her best friend, Elizabeth Taylor. The buxom brunette star was the widow of Fisher’s best friend, movie producer Mike Todd, and the pair grew close while Fisher consoled Taylor in her grief.

“You could say he consoled her to the point of matrimony,” Debbie Reynolds recalled. “I guess you felt Liz should always have a husband, even if it was yours.”

Introducing the world to the first huge celebrity scandal, Fisher and Reynolds divorced in 1959 and paved the way for the likes of Meg Ryan/Dennis Quaid/Russell Crowe, LeAnn Rimes/Dean Sheremet/Eddie Cibrian and Jennifer Aniston/Brad Pitt/Angelina Jolie. The Fisher-Reynolds divorce nearly cost him his career, and the subsequent Fisher-Taylor marriage nearly cost Elizabeth hers — until she kicked him out for Richard Burton.

The public, not yet immune to the amoral behavior of its Hollywood role models, never welcomed Fisher back into their hearts again. “It was as if by leaving Debbie I had broken up America’s perfect couple,” Fisher once said. His TV show was canceled, his fan club shut down and his concert bookings disappeared.

Fisher went on to marry three more times: Connie Stevens, with whom he had two children (actresses Joely Fisher and Tricia Leigh Fisher), Terry Richard and Betty Lin, who died in 2001. Fisher wrote two autobiographies with scathing details of his marriages, saying that he was bullied into marrying Reynolds, that he became Taylor’s nursemaid and that he only married Connie Stevens because he got her pregnant. A second bio gave sexual details so intimate that daughter Carrie Fisher said, “That’s it. I’m having my DNA fumigated,” and stopped speaking to him.

Fisher also admitted to a 37-year-long addiction to methamphetamines and cocaine and to sharing mistresses with President John F Kennedy.