Lindsay Lohan is back in jail after failing two drug tests. 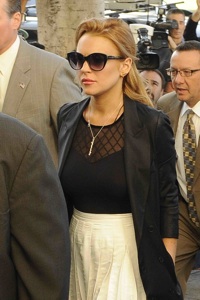 The judge threw the book at Lindsay Lohan today, sending her directly to jail without hearing any arguments from lawyers.

Lohan failed two court-ordered drug tests earlier this month. One tested positive for cocaine, the other for Adderall.

The judge had several options today and definitely chose the stiffest one. The judge could have held the hearing then and there and sentenced Lindsay to an immediate 30 days in jail — and we’d be seeing her back on the streets later today after being released due to overcrowding.

Instead, the judge set an as-of-yet undisclosed hearing date sometime in the next 30 days, denied bail and ruled Lindsay has to wait out her hearing in a jail cell with no hope of early release.

Lohan could be sitting in jail until October 22.

But she still doesn’t get it — TMZ says she looked “shocked” when the judge handed down the decision.

Stay tuned to SheKnows for more on this story as it develops.?