Lindsay Lohan must face Judge Elden Fox on Friday morning in a Los Angeles courtroom as a result of her failed drug tests. Is the redheaded actress headed back to the slammer?

Lindsay Lohan is due back in a Los Angeles courtroom Friday morning to face Judge Elden Fox. The judge revoked her probation and issued a bench warrant for her arrest earlier this week after the troubled starlet failed two of her required weekly drug tests. 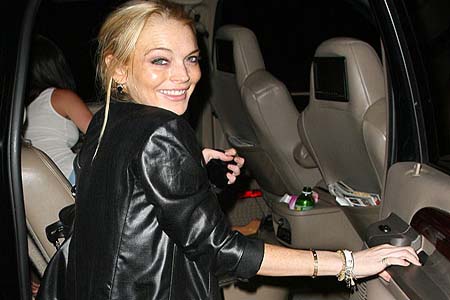 The troubled Machete star spent 13 days in jail and 23 days in a drug rehab program earlier this summer after failing to comply with the terms of her probation. She was put on probation after two arrests in 2007 for driving under the influence.

Lohan acknowledged her failed drug tests in a series of tweets last Friday night, hours after the news spread across the web.

“This was certainly a setback for me but I am taking responsibility for my actions and I’m prepared to face the consequences,” she tweeted.

She may claim to understand the severity of her situation, but US Weekly reports that Lohan made her Twitter confession while giggling and drinking Jack & Coke cocktails at a Los Angeles-area bar.

“Her friends would say, ‘No, use ‘setback,’ a source told the magazine. “It’s better to say that you’re responsible. Denying it will just get everyone mad per usual.”

She might be laughing now, but not in a few hours. Judge Fox is expected to bring the gavel down hard on the actress, due to her recent jail time. Lohan could see 30 days in jail for each failed drug test.

Good luck getting out of that one, kid.

READ on for more lindsay lohan