The fifth season of Brothers and Sisters premieres on Sunday, September 26 at 10 p.m. on ABC. Here is a sneak peek at what the Walker family has in store this season.

One year after the car accident that may or may not have killed Senator Robert McCallister (played by Rob Lowe), the Walker family has an awkward reunion for Justin’s homecoming party on the season premiere of Brothers and Sisters. Sarah and Nora decided to sell Narrow Lake, much to Justin’s dismay — however, the family has not agreed on what to do with the money. 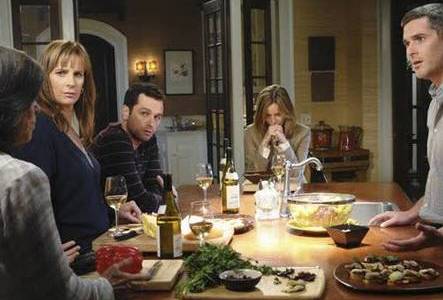 A family in turmoil?

After a year of avoiding their issues, it seems like everything has reached a boiling point. While Sarah is busy with the Narrow Lake deal, Nora is occupied with keeping everyone happy. With Kevin starting his new career as a public defense attorney and Scott busy with his new restaurant, they allude to the fact that they may not have a baby after all. Kitty’s personal life is a taboo subject, leaving us with more questions than answers.
In the season finale, we learned that Saul’s former boyfriend has been living with AIDS for years and he reluctantly gets tested. He tells Nora he is fine and the test was negative, however, after refusing to let anyone touch his bloodied body after the car accident we are left wondering how honest he was being about the test results. Will Saul come clean and tell his family the truth?

Read on for more Brothers and Sisters