Gwyneth Paltrow plays a country singer in her new romantic drama, Country Strong — and even plans on releasing a country music single! We know Gwynnie can do an English accent, but can she do a believable country twang?

Gwyneth Paltrow, 37, has proven she can sing (remember her Cruisin’ duet with Huey Lewis?) but it seems like a far stretch to play a country singer. From her Goop newsletters touting a master cleanse to her love of high fashion, she seems much more like an uptown girl than a “ridin’ in a pick-up” country gal (although she did name her daughter Apple). 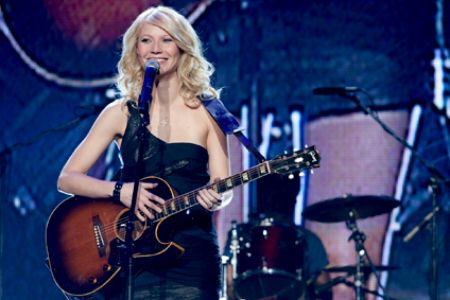 Paltrow’s new country single is actually quite good! She has a sweet voice that has the right amount of twang to make it believable, but not hokey.

The trailer to her movie, Country Strong, features Gwyneth as a successful country singer named Kelly who is fresh out of rehab. With the help of her husband-manager Tim McGraw, she plans a comeback tour, while continuing to battle her drinking demons. Gossip Girl’s Leighton Meester plays a young country singer that is set to tour with Paltrow’s Kelly.

Paltrow talked about Country Strong to MTV News back in May. “I played a country music singer. It’s all new, original work. It was incredible,” Paltrow said. “I had to learn how to play guitar and I took singing lessons. It was a real challenge, but I felt like I pretty much pulled it off.”

Paltrow ditches her Prada for plaid and surprisingly looks comfortable in this genre. The question is: Will the audience buy it?

Check out the trailer and tell us: Can Gwyneth pull off country?

read on for More Gwyneth Paltrow