The Harry Potter era is coming to a close as the first of the two final epic installments, Harry Potter and the Deathly Hallows Part 1, will be released in November of this year. The latest trailer for Part 1 has been released and things are looking intense for the franchise’s main trio — Ron, Hermione and Harry.

The ominous Harry Potter and the Deathly Hallows trailer begins with the new Minister of Magic Rufus Scrimgeour declaring, “These are dark times,” and the imagery that follows more than lives up to that declaration. It is announced that the war is on, but Harry cannot fight it alone because “he” (Voldemort of course) is too strong. 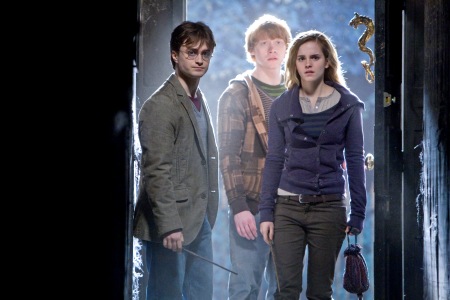 The new Harry Potter trailer launches into an assault of images that includes Voldemort in Dumbledore’s tomb, Snape announcing to Voldemort they’ve taken over the ministry and Voldemort declaring he will be the one to kill Harry Potter.

As they prepare for battle, Harry, Ron and Hermione travel the dark and scary English countryside and even pop into London where they dodge double-decker busses. Looks like the stress gets to Harry and Ron though as the friends tussle after Ron throws the fact that Harry has no family in his face.

The words “Only One Can Live” flash on the screen as more dynamic visuals are thrown at us including lots of magic and otherworldly creatures. But really, there’s so much going on in the trailer you might have to watch it a few times to catch it all.

Harry Potter and the Deathly Hallows Part 1 opens in theatres on November 19. After watching this latest preview, will you be able to wait that long?