Private Practice kicks off season four with a wedding and a whole lot of drama in the episode called Take Two. 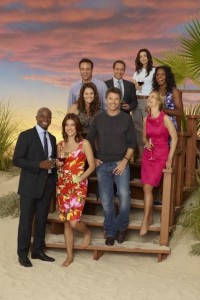 The Private Practice premiere episode begins several weeks after Dell’s death. The doctors gather to grieve for their friend and recap what’s been happening in their lives. As to be expected, there’s a lot going on, especially when Violet announces at Dell’s gravesite that she and Pete are getting married.

It seems after Violet and Pete reconciled, he proposed. They organize a last-minute wedding in a rose garden, but maid of honor Cooper is all too willing to help Violet make an escape when she gets cold feet. It looks like the “I dos” are said though, but it won’t be all smooth sailing for the happy couple this season. For one thing, Violet’s friendship with Cooper will get in the way of both their relationships leading Cooper’s lady Charlotte and Pete to become friends as well, leveling things out.

In other Private Practice premiere news, despite some initial awkwardness, Addison and Sam continue to heat things up. As for Sam’s ex, Naomi struggles to care for her daughter and brand new granddaughter while questioning Dink’s parenting abilities. Sam however, reaches out to the boy over a game of hoops.

Are you excited for the premiere of Private Practice? Do you want Addison and Sam to get together? Will Violet and Pete’s marriage last?

Read on for more Private Practice