The Bachelorette star Jillian Harris will join the cast of Extreme Makeover: Home Edition on a permanent basis. Check her out in her new job as one of the designers on the eighth season of the reality show during the two-hour premiere on September 26. 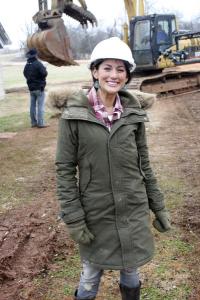 “There really are no words to describe this opportunity,” she says of the announcement as a permanent cast member on the show.

Harris, who is an interior designer by trade, initially had a guest appearance as a celebrity volunteer on one episode of Extreme Makeover in March, in which she helped re-build the home of a 2-year-old boy who had just received a heart transplant.

“The entire process brought me to tears,” she said after her guest appearance, “happy tears, grateful tears and tears of hope.”

The season premiere of Extreme Makeover: Home Edition will have Harris and the team working to renovate a Baltimore building that is the home base of the Boys Hope/Girls Hope organization that helps create a safe place for at-risk children. Celebrity volunteers will include Shaquille O’Neal, Katy Perry, Raven-Symone and the kids from the hit ABC show Modern Family.

Jillian back on the bus for good

“I can’t wait to get on that bus again and make a difference,” Harris tells People.com. “I have been such a fan of the show for years. I watched the designers and thought, ‘Wow, what an incredible opportunity that would be,’ and here I am one of those designers.”
Take note, future Bachelorettes! Even if you don’t end up with a new husband (Vienna, Deanna…the list goes on), you very well could end up with a cool new job — one that won’t cheat on you, call you nasty names or use you for celebrity status.

read on for more jillian harris