The Mentalist returns to CBS tonight with the season premiere Red Sky at Night. 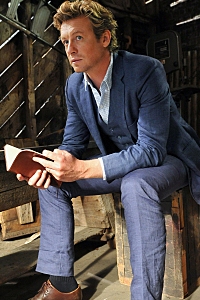 The Mentalist and Simon Baker are back with a season premiere showing a more serious side to Patrick Jane. Jane, played by Golden Globe nominee Simon Baker, shows his notorious blatant disregard for protocol almost immediately upon meeting the new CBI head. Jane also struggles with his continued obsession with Red John. “Jane was pretty badly traumatized by his encounter with Red John,” creator-executive producer Bruno Heller told TVGuide.com.

“It wasn’t on Jane’s terms. He felt violated and to a degree humbled by the experience. Jane had always had some sense that this was an equal duel of wits. But the last episode showed it was certainly more of a cat-and-mouse thing going on, and that Red John was holding all the cards.”

As a result, The Mentalist creator Bruno Heller says Jane begins to pull away from everyone he cares about out of fear they will become victims of Red John. Lisbon won’t stand for such nonsense, though. “Her faith in him and her willingness to go to bat for him means they’re much tighter,” Heller said. “As much as he wants to protect her by pulling away from her, he feels more love for her this year because they’ve been through so much, yet she’s proven that she’ll be there for him.”

The Mentalist season premiere airs Thursday, September 23 at 10 p.m. on CBS. Want a sneak peek of that very moment on tonight’s The Mentalist premiere? Check it out!