Katy Perry’s Sesame Street appearance has been pulled from the PBS children’s show after parents were outraged after viewing a released YouTube clip of the pop singer showing too much cleavage during her performance. 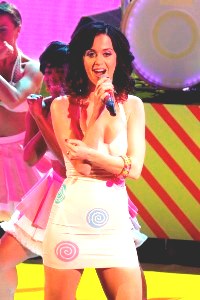 Katy Perry rose to fame with her hit song, I Kissed A Girl and her popularity continues to grow, thanks in part to her catchy songs, outrageous outfits (whip cream bra, anyone?) and her engagement to Russell Brand.

So, what makes her a fit for Sesame Street? The popular kid’s school program has a history of including celebrities in their show, with stars ranging from Richard Pryor to Jodie Foster and Jack Black. Other celebrities slated to perform this season include Ryan Reynolds, Jennifer Garner, Jason Bateman and Will.i.am.

“Sesame Street has always been written on two levels, for the child and adult,” a spokesperson for Sesame Street said in a statement. “We use parodies and celebrity segments to interest adults in the show because we know that a child learns best when co-viewing with a parent or care-giver.”

Perry is not revealing anything that most kids wouldn’t see on the beach, however her skimpy neon green outfit does bare more skin than your average kids’ show — particularly in the scenes where she is chasing Elmo. Even though her outfit did have a flesh-colored mesh covering her cleavage, it is surprising the show didn’t suggest she cover up a bit more.

Bottom line: Will this traumatize your kids? No. Will your husband suddenly show an interest in Sesame Street? Yes.

“Don’t even know why they risked it,” wrote a YouTube commenter. “Should have just thrown a turtle neck on her and been done with it.”

Other moms wrote that “Sesame Street has stooped to a new low,” while one person defended the outfit: “I’m surprised these parents aren’t complaining about Katy’s knees too. How scandalous! Not. This? is so absurd. Next thing you know they will demand all the guests cover their ankles.”

Sesame Street decided to pull the episode featuring Katy Perry, saying: “We…value our viewers’ opinions, and particularly those of parents. In light of the feedback we’ve received on the Katy Perry music video, which was released on YouTube only, we have decided we will not air the segment on the television broadcast of Sesame Street, which is aimed at preschoolers.”

Katy took to Twitter to respond, saying “Wow, looks like my play date with Elmo has been cut short! If you still wanna play see it at www.katyperry.com Tag you’re it, Elmo!”

Check out Katy Perry singing Hot N Cold on Sesame Street and let us know what you think!

READ ON FOR More Katy Perry