From Bridget Jones Diary to Harry Potter: Chamber of Secrets, Gemma Jones has warmed American audiences’ collective hearts for years. Now, she is set to tackle a new set of film challenges that Jones has conquered with sass, the entity that is the Woody Allen film.

Gemma Jones stars in You Will Meet a Tall Dark Stranger. In the film, the latest from Woody Allen to be set in London, Jones is married to Anthony Hopkins who leaves her during a late-life crisis. 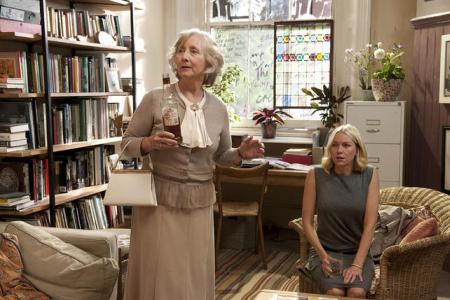 One of the September movies to watch, You Will Meet a Tall Dark Stranger stars Jones and Oscar-winner Hopkins, Oscar nominees Naomi Watts and Josh Brolin as well as British up-and-comer Lucy Punch.

Allen’s latest is the story of two couples riding the rollercoaster of love and finding that each may want to get off.

Jones traveled to America to talk about You Will Meet a Tall Dark Stranger and to share exclusively in our video interview, what it was like to work with an American filmmaking legend in Woody Allen.