Katy Perry has been pulled from the New Year’s Eve Sesame Street special for being too sexy.

Hot N Cold singer Katy Perry already taped her Sesame Street segment, a remake of that very song sung while playing dress-up with Elmo. The bit leaked on TMZ and Sesame Street got an earful from prudish parents who didn’t care for Katy’s outfit. 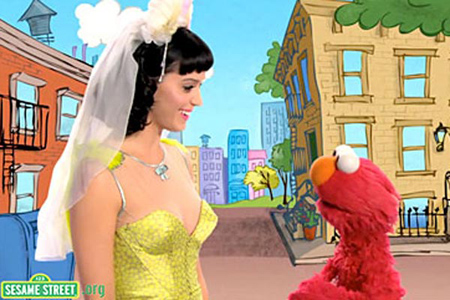 Some favorite comments include:

— “You can practically see her t*ts. That’s some wonderful children’s programming.”

— “They’re gonna have to rename it cleavage avenue”

The fact of the matter is that Perry, who is engaged to Russell Brand, is wearing more than Tinkerbell wears in Peter Pan — at least Katy’s dress features flesh-toned mesh up to her neck, while that trollop Tinkerbell just tramps around in a strapless minidress with all that bare skin.

Plus, it wasn’t that long ago that these kids had breasts in their mouths anyway — and there’s absolutely nothing remotely sexual about Katy’s performance on the show.

Are the parents complaining about her dress the same ones who let their kids play violent video games? Survey says…?

See what SheKnows editor & mom Kim Grundy has to say about Katy Perry on Sesame Street.

Read on for more katy perry