Joaquin Phoenix returned to The Late Show with David Letterman to set the record straight.

Casey Affleck recently let the cat out of the bag that his Joaquin Phoenix documentary, I’m Still Here, is actually a mockumentary. The subject behind Casey Affleck’s film made his return to The Late Show with David Letterman to apologize, one year after he appeared in a wacky state-of-mind. 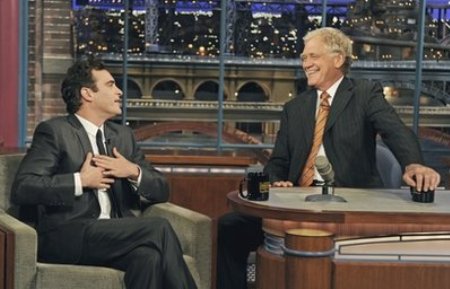 Joaquin Phoenix explained to David Letterman on Wednesday night that his appearance last year was simply a larger than life character.

“You’ve interviewed many, many people and I assumed that you would know the difference between a character and a real person, but I apologize,” Phoenix said. “I hope I didn’t offend you in any way.”

Always up for a little pranking, David Letterman let Joaquin Phoenix off the hook with no offense taken.

Joaquin Phoenix’s clean-cut appearance on Wednesday night was miles different from his ragamuffin look back on February 11, 2009, when he announced to David Letterman he was trying to launch a rap career. We now know the act was part of a ruse connected with Casey Affleck’s documentary, I’m Still Here. 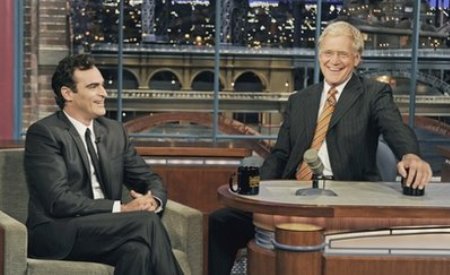 David Letterman described Phoenix’s 2009 interview, saying it was “like you slipped and hit your head in the tub.”

David Letterman might be okay with taking one for the team every now and then but he asked Phoenix to make it clear he was not part of the hoax.

“We’d hoped to come on a talk show,” Phoenix explained. “And I was looking for a beat down, and I got one. I want to thank you for that.”

Phoenix’s persona last year included his giant sunglasses and mangy beard. He revealed that at one point Casey Affleck got angry with him for taking off the shades at the end of last year’s appearance with Letterman.

“I was eager to thank you for the opportunity and I was really eager to get off the show,” he said.

Joaquin Phoenix and Casey Affleck had the wheels turning in our heads as to what was going on with Phoenix, but in the end I think we knew this would eventually play itself out.

What did you think of Joaquin Phoenix’s latest Letterman appearance? Sound off in the comments section.

Read on for more Joaquin Phoenix