Lindsay Lohan could sit in jail for 30 days waiting for a hearing after she failed two court-ordered drug tests. 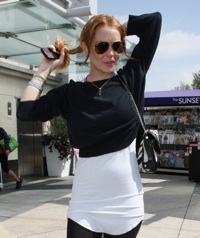 TMZ has the scoop on what could happen to Lindsay Lohan because of her two failed drug tests, and it could either be pretty stiff or less than a slap on the wrist.

Lindsay failed two drug tests earlier this month — one tested positive for cocaine and the other for Adderall.

The LA County Probation Department isn’t going to kick her for that second violation because of what TMZ is calling an “ambiguity in the paperwork that went from the court to the probation office.”

What that ambiguity might be isn’t clear. However, it is known that Lindsay was being prescribed Adderall by her doctors before her arrest and it was thought to be one of the drugs she was being weaned off of in rehab as docs there thought it was misprescribed.

There’s no getting around the cocaine, though. There are two things that could happen at Lindsay Lohan’s next court date on Friday.

The first sounds harsh but is actually the best case scenario: The judge sentences her to an immediate 30 days in jail — but because of overcrowding she would actually be released the same day.

The second is the option Lindsay is probably dreading. The judge could deny her bail and set a hearing to take place 30 days later. Guess where Lindsay would wait out those 30 days? A jail cell. She would have no hope of early release under these circumstances and would be an inmate until the hearing. If a judge wants to make sure the defendant does their time, this is often the option they choose.

Stay tuned as this story develops on Friday…