Unfortunately in reality TV someone has to be the first one to go home and that someone was David Hasselhoff and his partner Kym Johnson who were eliminated from last night’s Dancing With the Stars.

As is standard practice by now, the Dancing With the Stars results show dragged out for an hour torturing the stars as they waited to learn their fate. In between deeming certain dancers safe, such as Jennifer Grey, who landed at the top of the leader board after the judges gave her a 24 for her emotional waltz, Carlos Santana performed with India Arie, as well as Chris Daughtry, while the professionals danced. 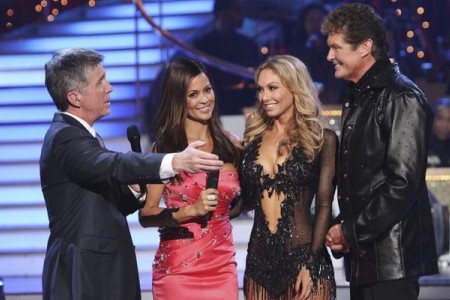 After more celebrities were declared safe, including The Situation, whose fans obviously saved him considering his lack of rehearsal time and the painful critique the judges doled out for his Cha Cha Cha, it came down to Disney cutie and enthusiastic performer Kyle Massey and his partner Lacey Schwimmer and David Hasselhoff and Kym Johnson.

Considering Kyle gave such a crowd-pleasing performance and scored a 23 on his Cha Cha Cha, whereas David only earned 15 points from the judges, it seemed like a no-brainer that The Hoff would be the first one to leave the dance floor.

Even though his fans couldn’t save him from such an early Dancing With the Stars elimination, David Hasselhoff had no hard feelings. He told E! Online, “The sad part about it is that after three weeks Kym and I are good friends. But in the end when it got down to the four of us I thought, I don’t want to see these guys go! I’m very happy. I’m sad for Kym, but tomorrow I’ve got to go to Laughlin and do my show there.”

Good to know The Hoff will be just fine.

Do you agree with the outcome? Who do you think will be next to go?