Academy Award winner Gwyneth Paltrow will appear on upcoming episodes of Glee. Is she Puck’s new love interest, or Sue Slyvester’s new nemesis? Read on and get the inside scoop! 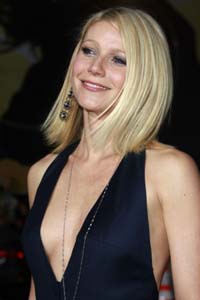 Remember when Gwyneth Paltrow sang a duet with Huey Lewis? Oh, you don’t. Guess we’re the only ones.

Take our word for it — the Oscar winner can carry a tune.

Good thing too, because Paltrow is set to appear on upcoming episodes of Glee. The mom of two is set to to appear in two episodes as a substitute teacher for Mr. Schu.

How did this collaboration come about? Turns out Glee creator Ryan Murphy is a big fan of Paltrow’s pipes.

“Gwyneth is a great singer,” Murphy told the BBC. “She’s done it a little bit but I really want to show it off and show everyone how great she is.”

Paltrow is another addition to the eclectic cast of stars set to appear on the wildly popular show’s second season. Britney Spears and John Stamos make cameos in next week’s episode. Eat, Pray, Love star Javier Bardem is also set to appear during the season as a “crazy Spanish rock and roll singer,” according to Murphy.

The steady influx of A-listers on Glee pretty much secures the show’s ratings for the season. We can’t wait for Paltrow’s appearance, but we’ll put Cruisin’ on repeat until her episode airs.

Check out Paltrow’s musical prowess along with Huey Lewis in Duets.

Read on for more glee