What have the good folks at McKinley High been up to? For starters, Glee’s Rachel and Finn revealed they had been dating all summer, Puck got a vasectomy and proved he’s not over Quinn, Santana got a boob job — which caused Sue to replace her as Cheerios captain with Quinn, Tina dumped Artie for Mike Chang, which prompted Artie to want to try out for the football team in order to compete with him. 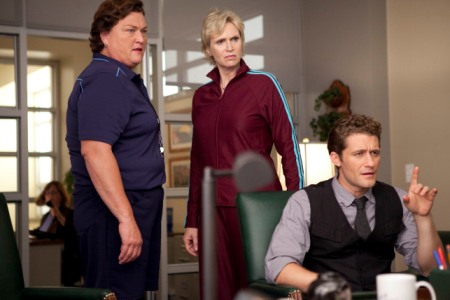 Also on the Glee season premiere, jilted football coach Ken Tanaka had a nervous breakdown and was replaced with a woman you don’t want to mess with named Shannon Beiste. Her presence didn’t go over too well as her football budget was taking away from the Cheerios and New Directions. Sue Sylvester reacted by enlisting her nemesis Will Schuester to retaliate. However, good guy Schuester had a change of heart when things got too ugly, as one would expect, and that fact did not go over too well with Sue. So, it’s back to the rivalry we all know and love.

As for the musical portion of the show, it was revealed that nationals will be held in New York this year, so Schuester led his gang in a rousing rendition of Empire State of Mind. Their lunchtime performance created interest from foreign transfer student Sunshine (Charice) and jock Sam (Chord Overstreet). This in turn led to Sunshine and Rachel engaging in a sing-off of Telephone and Finn overhearing Sam belt out Every Rose Has Its Thorn. 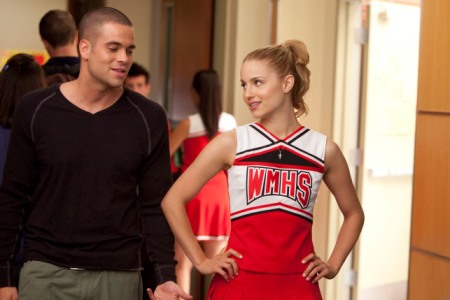 The new kids’ auditions for New Directions didn’t go well. Rachel sabotaged Sunshine (to protect the group of course) and Sam made quarterback of the football team — of which Finn was kicked off — so he didn’t show up fearing negative social backlash.

As part of Sue’s revenge plot, she got the coach of rival glee club Vocal Adrenaline to recruit Sunshine, which caused the group to gang up on Rachel, who tried to defend herself in song with What I Did For Love.

Next week John Stamos joins the cast, which features songs by Britney Spears. Are you excited? We are!