Shania Twain has signed a deal with Atria Books, an imprint of Simon and Schuster, to publish her autobiography. Twain’s yet-to-be-titled tell-all will be published in spring 2011. 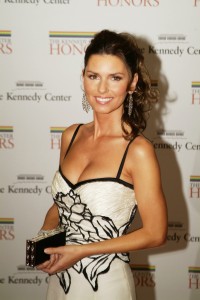 According to a statement, the memoir will chronicle Twain’s “challenging and sometimes shockingly painful upbringing” in rural Ontario, the “tragic death” of her mother and stepfather, her “against all odds” rise to fame and the recent breakup of Shania Twain’s marriage to music producer Robert “Mutt” Lange.

Sounds like an inspirational tearjerker perfectly suited to be made into a Hallmark TV movie.

“There have been moments in my life I was concerned by the reality that tomorrow would never come,” Twain said in a release.

“Recently I experienced one of those moments to an intensity that brought on a sudden urgency to document my life before I ran out of time, before I had the opportunity to share an honest and complete account of my life, in my own words.”

As a writer, we have to say, that statement is mighty irksome since we all know Twain won’t actually write a single word of her biography.

Most people gloss over it, but look at the majority of celebrity memoirs and below their marquee name you’ll find a “with” featuring the name of the actual writer of the piece, the person who toils and suffers and crafts prose based on interviews with the star. All Shania Twain will do is sit and chat into a tape recorder, leaving someone else to do the grunt work, but her hands will never touch a keyboard or a pen to scribe anything “in her own words.”

Bitter, party of one? A little, but we’d just appreciate a little truth in advertising.

Twain’s book release will likely coincide with the premiere of her inspirational new show on Oprah Winfrey’s OWN network.