The new panel of American Idol judges, including Steven Tyler, Jennifer Lopez and the ever-present Randy Jackson, brings a wide range of experience and talent to the show. 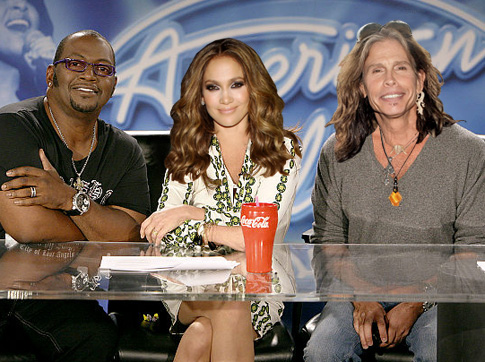 If you’re gonna call yourself a rock star you have to act the part. That means wearing crazy outfits on stage including ripped leather and lots of scarves. Develop a drug and alcohol addiction of mythological proportions. Write as much of your own material as your manager will let you get away with. Sing your ass off and tour nonstop. Let just enough rumors of dissention in the ranks leak out to keep people talking about your new single/tour/album. Quit and rejoin band several times for the same reason. When your star begins to fade, team up with an emerging talent in an up-and-coming musical genre completely different from yours and become an icon. Enjoy another two decades of the same.

Get really lucky and star in one film that captures a highly lucrative emerging demographic (like Selena). Get extensive yet gradual plastic surgery and major hair extensions to erase all traces of that demographic from your face and become more commercially palatable. Wear scandalous outfits while dating someone more famous than you but dump him when he starts to tarnish your image by acting like a thug. Claim you want privacy but trumpet your next relationship in your videos and critically panned movies. Sprinkle multiple short-lived marriages to nobodies in between. Get yourself in the tabloids however you can. Talent has nothing to do with this plan. It’s not like J Lo can sing, and she’s only a marginal actress, but she is marketable and that’s what matters in the entertainment biz.

See? Piece of cake! Competitors could also choose the Chris Daughtry middle ground route of Elevator Rock. It won’t make you a superstar, but it will earn you a nice paycheck. Of course, Daughtry isn’t a judge so that plan won’t win the competition — but neither did Daughtry.

In addition to Lopez and Tyler, rumored to have been under consideration were Shania Twain, Harry Connick Jr, Elton John, Jessica Simpson, Mariah Carey and Chris Isaak.