Maroon 5 is back and has given their new album, Hands All Over, to SheKnows so we can share it with our readers! The 12-track set marks the triumphant return of the group that is at the top of their game in pop music. 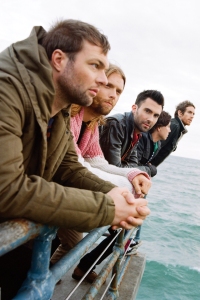 Adam Levine and Maroon 5 have crafted a new CD that is filled with Maroon 5’s trademark licks, hooks and back-beats that have made them one of the most popular bands of the decade.

Believe it or not, Maroon 5 has only released two albums since 2002. Their first big-time studio album, Songs About Jane included hits This Love, Harder to Breathe, She Will Be Loved and Sunday Morning. They reemerged atop the pop charts with 2007’s It Won’t Be Soon Before Long that produced radio friendly smash Makes Me Wonder and their duet with Rihanna, If I Never See Your Face Again.

The Los Angeles-based quintet returns with a new set of pop gems, Hands All Over, out now globally. Maroon 5 turned to superstar producer John “Mutt” Lange for their latest effort and the results are sonic succulence. Lange has crafted hits from a wide range of artists from Def Leppard and AC/DC to his ex-wife, Shania Twain. His handprints are all over Hands All Over!

Maroon 5’s first single from Hands All Over was Misery which stormed radio over the summer and now to mark the release of their new album, a new single has been released: Give a Little More.

So kick back and enjoy 12 new songs from Maroon 5 in the SheKnows exclusive listening party!