Jennifer Grey made an emotional debut on Dancing With the Stars. 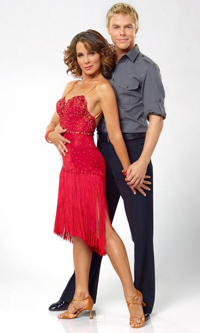 The Dirty Dancing actress paid tribute to her costar Patrick Swayze by waltzing to These Arms of Mine, a song featured in the classic film.

Swayze passed away last year after a battle with pancreatic cancer.

Grey, now 50 years old, performed a Viennese waltz with partner Derek Hough and absolutely killed it in a sparkling, clingy silver gown and a body that gives Demi Moore a run for her money.

The team leads the competition so far with 24 points, receiving 8’s from all three judges.

The big question on everyone’s mind is if Grey will reenact the famous lift from the final number in Dirty Dancing. Reports are that it will not happen because of Grey’s cancer scare: During physicals in preparation for DWTS, docs found a malignant tumor in Grey’s neck. It was later successfully removed, but Grey also suffered neck damage from a past car accident that leaves her spine in a delicate state that could be exacerbated by a dance move like that beautiful lift.

Or maybe she’s waiting to see if she makes it to the finals and will pull it out then as a clincher!

Jennifer Grey on Dancing with the Stars video!

read on for more dancing with the stars