Glee returns tonight for another tuneful season that promises huge guest stars and musical numbers everyone will be talking about!

The Glee season two premiere is tonight! What can audiences expect? 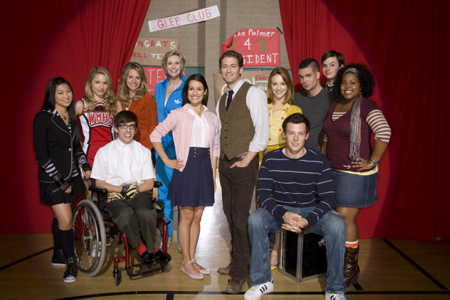 First of all, it’s the music that makes the show. Listen for renditions of Jay-Z’s Empire State of Mind, Lady Gaga‘s Telephone and Travie McCoy’s Billionaire. “They just came to my management to get the okay,” Travie said. “Once I found out, I was all about it. I was just watching Glee last night. I didn’t realize how deep that show is. It’s funny, but there’s definitely some serious (expletive) going on. I’m stoked to be a part of it.”

Britney Spears makes an appearance later in the season, and we’ll also be treated to tributes to Michael Jackson and The Rocky Horror Picture Show.

One Gleek has surgery over the summer, and one will try out for the Cheerios. Are they one and the same? You’ll have to watch to find out.

An Asian hookup, lots of auditions for new Gleek spots and a possible love interest for Finn are also in the cards. Last season Glee garnered a record 19 Emmy nominations — can they repeat this year?