The new season of Dancing With the Stars begins tonight. Who will emerge as the front-runner? Who will be the dark horse? More importantly, who will be the first one to go home? 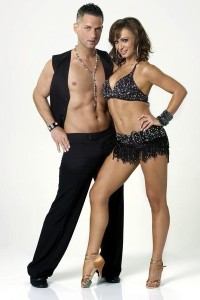 We don’t have those answers just yet, but we can give you a preview of what you can expect on the season premiere, as tonight’s Dancing With the Stars will include the Cha Cha Cha and Viennese Waltz.

Those shaking their hips to the Cha Cha will include Audrina Patridge and Tony Dovolani dancing to California Gurls; Bristol Palin and Mark Ballas dancing to Mama Told Me (Not to Come); Florence Henderson and Corky Ballas do Kiss Me Honey Honey Kiss Me; Kyle Massey and Lacey Schwimmer Cha Cha to My First Kiss; David Hasselhoff and Kym Johnson dancing to Sex Bomb; and The Situation and Karina Smirnoff boogie to Break Your Heart.

Slowing things down a bit with the Viennese Waltz will be Brandy and Maks Chmerkovskiy dancing to Cry Me Out; Margaret Cho and Louis Van Amstel embracing to We are the Champions; Jennifer Grey and Derek Hough invoking Dirty Dancing’s Patrick Swayze as they dance to These Arms of Mine; Kurt Warner and Anna Trebunskaya dancing to This Ain’t a Love Song; Rick Fox and Cheryl Burke waltzing to Crazy; and Michael Bolton and Chelsie Hightower dancing to Life After You.

Word is Sarah Palin will be in the audience to watch as her daughter Bristol Palin rips off some tear-away clothes.

If that’s not must see TV, then what is? It’s also safe to assume David Hasselhoff will cheese up the dance floor, as he will be hamming it up in sunglasses amid pyrotechnics. And one can only expect that The Situation will reveal his abs at some point during his performance, ensuring Len Goodman and Bruno Tonioli have no shortage of one-liners as they critique the reality star.

Who do you think is the one to beat and who will prove to be most entertaining? Find out tonight on Dancing With the Stars and don’t miss our recap in case you missed the moves!

Dancing with the Stars premiere video