We can’t tell you how many fights we’ve gotten into with our friends over Two and a Half Men.

Two of our girlfriends (Ana and Jenny, yes we will call them out by name since they have no shame in their choices) love it; the rest of us find it insipid. Back and forth we go as they chant the show’s inanely bellowing and repetitious theme song (“Men, men, men, men, men, men, men…” You get the picture) and we struggle to grasp how a show so unfunny is supposedly a “comedy.” 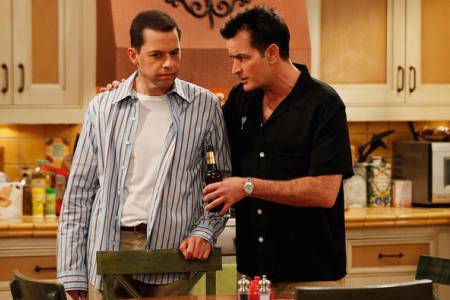 But Ana and Jenny always go back to the same point: If it weren’t popular, Charlie Sheen wouldn’t be making millions of dollars a year. True.

As much as we love Duckie, aka: Charlie’s co-star Jon Cryer, Two and Half Men lives and dies by its anchoring force, Charlie Sheen, as evidenced by the whopping checks the actor will begin cashing at the start of the show’s eighth season, which kicks off this week on CBS.

Since 2008, Sheen has been the highest paid actor on TV, but this year he got a raise and will now bank $1.2 million an episode to play a womanizing actor named Charlie who loves two things too much: booze and tail.

Obviously, it is not much of a stretch for old Charlie Sheen.

Continuing to ensure Sheen is required to do as little acting as possible to earn his mammoth paycheck, this season Two and a Half Men will focus on “Charlie” laying off the booze.

Considering Sheen is in the middle of a nasty domestic violence dispute with his wife following a serious incident in Aspen, Colorado fueled by alcohol and drugs, it’s a “storyline” obviously near and dear to his heart.

Who knows, maybe life will imitate art in a good way for Sheen.

Two and a Half Men premieres tonight on CBS.