Lone Star premieres tonight and it reminds us that at the start of each television season, a new star is hailed as the small screen’s latest phenom. 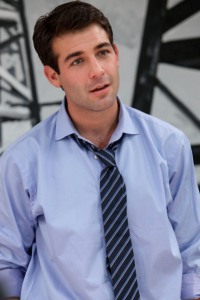 With headlines that read “Fox Strikes Black Gold with Lone Star,” and critics calling it “inventive” and “original,” the show’s praise is universally tied to 25-year-old Wolk, an actor whose most substantial credits before the show were a stint on As the World Turns and a performance in the upcoming You Again.

James Wolk joins a pantheon of TV’s most impressive conflicted antiheros such as Breaking Bad’s Bryan Cranston and Mad Men’s Jon Hamm. In Lone Star, James Wolk stars as Robert or Bob Allen (if you want to believe that’s really his name), a second generation career con man who is scamming a large oil company, the family who owns it, a lot of innocent small-time investors, his wife and his girlfriend.

Not as nefarious as it seems, Bob wants to live on the straight and narrow and he really does love his wife. And his girlfriend. It’s complicated and that makes for damn fine fall TV. Lone Star premieres tonight on Fox.