In the season six finale of House, the grumpy doctor lost a patient and was this close to popping pills to cope. 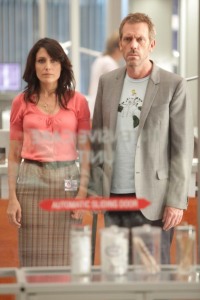 When Cuddy showed up in the nick of time, House (Hugh Laurie) took her hand instead of the drugs. Tonight, the romance begins anew on House!

Wilson is worried when Dr. House calls in sick after last season’s heartbreaking loss, but House is doing better than ever. He’s actually just playing hooky with his new girlfriend, Dr. Cuddy!

In a shocking twist, Cuddy dumped her fiance and told House she loved him. Tonight, it’s time to see what that means for them in the season premiere, which is appropriately titled, Now What?

House calls in sick for both of them and the new couple has a cocoon day. Their time out offers them a chance to finally seal the deal with a few proverbial rolls in the hay, while also sussing out the ramifications of their new status, their feelings and whether this romance can really work.

With Princeton Plainsboro’s top docs out sick, House’s team is left to deal with a hospital crisis. The on-call neurosurgeon (George Wyner) is throwing up and House tells Cuddy’s new assistant to send him home. The problem is, the hospital needs a neuro doc on call or it will lose its Level 1 Trauma Center accreditation.

Chase and Thirteen hustle to find a solution before half the hospital is closed down.

House returns to Fox at 8 p.m. Monday, leading up to the series premiere of Lone Star.