The series premiere of Chase is on NBC tonight!

The hot new series Chase starts off with a bang: U.S. Marshall Annie Frost is in charge of capturing a killer and doesn’t let up until the bad guy is in cuffs. 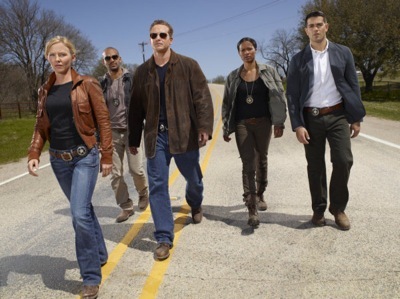 Chase stars Kelli Giddish as the tough-as-nails Annie Frost, Cole Hauser as Annie’s possible love match and Jessie Metcalfe as the rookie under trial by fire. Chase leads viewers down a path of frenetic crime-solving.

It’s no surprise that Chase is action-packed — it’s produced by big budget action impresario Jerry Bruckheimer, responsible for all those big-explosion-type movies and TV shows. And with the behind-the-scenes research Giddish did, Annie Frost is sure to mesmerize.

“I went down for a week with the Houston Marshalls…” Giddish told TVOvermind.com. “I couldn’t believe, honestly, the will that they have, day after night after day after night, to catch the bad guys and they do. They’re just dogged in their determination to keep our community safe and I didn’t realize the level at which they take the commitment to the job.”

What’s Annie’s motivation behind her own dogged determination to catch bad guys? Her own past. Turns out her dad is a wanted fugitive himself. Look for this tidbit to pop up again later in the series.