Last we saw Castle (Nathan Fillion) and Beckett, she was facing the news of his reunion with his ex. The next time we see them, he’ll be facing the barrel of her pistol. 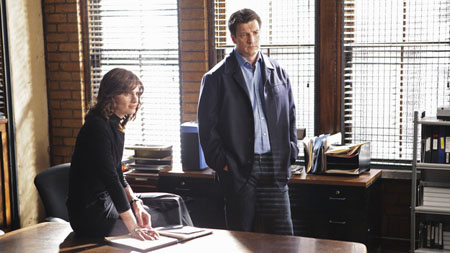 After two years, things had come to an emotional head between the pair: Castle needed a break from their working relationship because of Beckett’s new romantic entanglement. Beckett dumped the guy when she figured out why Castle was leaving, but when she tried to share her feelings at Castle’s goodbye party he told her he’s getting back with his ex.

The tension continues in the opening moments of season three, when the duo has their guns pointed at each other. Did she really take the news that badly? Not quite.

Flash forward a couple of months after the disastrous goodbye. Beckett and her team are hot on the trail of a murderer, but when they burst into the room they find Castle standing over the dead woman with a gun in his hand. Did he do it? Doubtful. But Beckett will take great satisfaction in arresting him anyway.

So what’s on the agenda for this star-crossed couple this season?

“I knew after the way we ended last season, we couldn’t just have Castle walk back into the precinct and say, ‘Hey, I’m back,'” creator-executive producer Andrew Marlowe told TVGuide.com. “We get to see Castle and Beckett on opposite sides. I knew the notion of Beckett being able to put Castle in the interrogation room on the other side of the table and ask a bunch of questions — the subtext of which is, ‘Where have you been? Why didn’t you call?’ — was going to be a lot of fun for viewers.”

So will they get over themselves? “I don’t think they’re back to square one,” says Stana Katic, who plays Beckett on the sleeper hit. “They have so much history… There’s nothing that can untie that kind of a bond between those two characters. Once they get past this hurdle, then they’ll be diving into another level of a friendly relationship. But he comes back in a relationship, so they’re not going to be making love anytime soon.”

November sweeps for Castle will throw a new obstacle in their path: A serial killer who knows how to work a room. “We have a villain for Castle and Beckett who can be in the wind and continue to complicate their lives and investigations,” said executive producer David Amman. “He’s pretty dark, but not to the point that it’s a violation of the bounds of the show. When he’s in the interrogation room with Castle and Beckett, he’s a force to be reckoned with — inside that room and out.”