In February, the world lost a fashion icon in Alexander McQueen. Monday, those who loved McQueen said their final goodbyes. 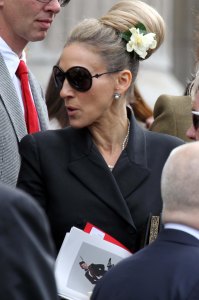 Alexander McQueen dressed the fashion world with his art and in return they praised him until the end.

An elite bevy of fashionistas and A-list stars, including supermodel Kate Moss and Sarah Jessica Parker, were in attendance at St. Paul’s Cathedral in London on Monday for a memorial service dedicated to British designer Alexander McQueen.

The world lost a beautifully twisted fashion mind when McQueen committed suicide in February after the death of his mother. The 40-year-old designer took a lethal dose of cocaine, tranquilizers and sleeping pills before hanging himself at his London home.

The stars who wore his label and attended the service respected him. “I loved him,” Kate Moss told Reuters outside the famous St. Paul’s Cathedral.

Fashion-forward Sarah Jessica Parker added that Alexander McQueen was “one of a kind, very. The service was bitter-sweet, perfect.”

Alexander McQueen was innovative and his shows pushed the envelope in a shockingly provocative way. McQueen’s Highland Rape and Dante collections are among classic masterpieces to stand the test of time.

Editor-in-chief of Vogue, Anna Wintour, told the mass of mourners a tale of McQueen’s impact with the story of his Dante collection, which featured models wearing the “bumster” trousers worn well down the hip. The look set foot down the runway in New York in the late 1990s.

“One model turned to give me an extremely prominent close-up of her mostly naked back view,” Wintour told the cathedral filled with more than a thousand people. “Well, after that collection it was a done deal. Everybody lowered their trousers everywhere.”

Bjork showed up to the memorial dressed in angel wings and a silver helmet to pay tribute to the legend. She performed Gloomy Sunday which talks of making the decision to take one’s life.

After the haunting piece, bagpipers in kilts sounded off as those closest to Alexander McQueen stepped out of the cathedral and into a sunny day.

Alexander McQueen rose to the top as one of the most sought-after fashion minds. He was part of a working class family in London and dropped out of school at 16. He found an apprenticeship with the Savile Row tailors Anderson and Sheppard before moving on to Gieves and Hawkes.

He eventually gained a master’s degree in fashion design from Central Saint Martins College of Art and Design.

Alexander McQueen always thought big and left a brilliant legacy that included his own label, adoring fans and classic collections. He will truly be missed.