Russell Brand was arrested at LAX on Friday afternoon, according to LA police.

The Los Angeles Police Department confirmed the news to UsMagazine.com that Russell Brand ran into some trouble. We were hoping it was wrong. 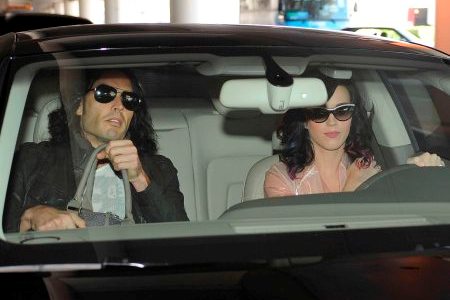 The British comedian, who isn’t shy when it comes to his dirty mouth or shocking antics, and his fiance Katy Perry were allegedly making their way through LAX airport security when Brand began pushing and striking photographers snapping pictures of the couple.

According to reports, Russell Brand was interviewed by the airport’s finest men in blue and taken into custody. The worst part is that Brand and Perry missed their flight. Curse you paparazzi!

In good news, Russell Brand was released from police custody on a misdemeanor charge of simple battery with bail being posted at $20,000. The comedian has much better things to do than appear in an LA court, but he will on October 15.

Katy Perry tweeted, “If you cross the line & try an put a lens up my dress, my fiance will do his job and protect me.”

They love each other, don’t they?