There are numerous reasons to witness the majesty of Easy A. First, star Emma Stone has a coming out party that should land her firmly on the A-list map. Stone’s performance proves her buzzed-about turn in Zombieland was a perfect precursor to her Easy A greatness as Olive. Her sensational comic timing could alone make Easy A a must-see.

An Easy to love cast

But, there is so much more to Easy A that has it firmly placed among the top fall films. 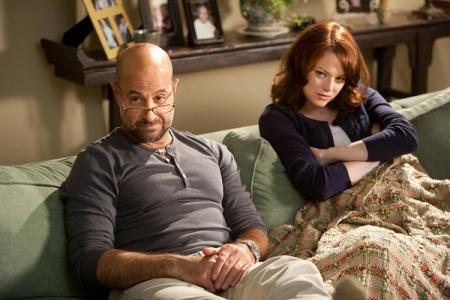 Easy A’s supporting cast is top notch. At the head of the class are Academy Award-nominees Stanley Tucci and Patricia Clarkson as Olive’s parents. Tucci and Clarkson work effortlessly together and if the audience wasn’t so enthralled with Emma Stone’s screen time, they would be demanding more from the super onscreen parental duo. Who knew Tucci could be so hilarious? He has the film preview’s best line, watch it below!

Also in this all-star cast is Penn Badgley, who goes beyond his Gossip Girl persona to establish himself as a solid film romantic lead. Badgley’s character has a visible crush on Emma Stone’s Olive that is clear to everyone except Olive. Badgley could have turned in a performance that was straight out of the high school teen movie playbook. But, instead, he crafts a subtle and layered character that is able to stand toe-to-toe with Stone in each scene that they share. 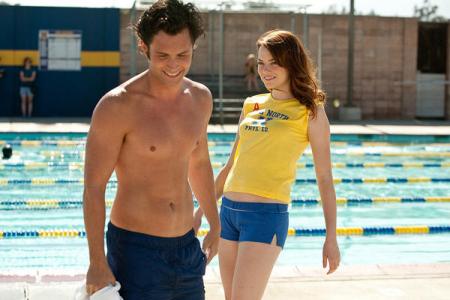 Also running around the Ojai, California high school grounds and stealing every scene she’s in, is Amanda Bynes. Thank goodness she “unretired” as her saintly student is the perfect comic foil to Stone’s Olive.

Cougar Town star Dan Byrd is surprisingly tender as a gay student who is not ready to come out, Twilight hottie Cam Gigandet shines as a clueless twenty-something high school senior and Hellcats star Alyson Michalka turns in a solid performance as Olive’s best friend.

Easy A: An easy to believe premise

As has been famously portrayed in the film’s extensive marketing campaign, Easy A is the story of how a girl, who felt she was lost in the high school shuffle, finds herself at the center of a rumor. That rumor: That she lost her virginity. In some ways enjoying the attention, at first, she doesn’t deny the rumor’s truth. Then, she turns the rumor into a wildfire of mistruths as she “aids” male friends with their reputations by making up affairs that they shared. Next thing Olive knows, she feels an awful lot like Hester Prynne, the main character in The Scarlet Letter, which is currently being discussed in her English class. 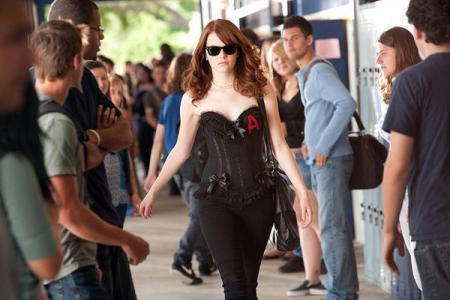 Olive changes her look to a more sexy set of clothes, all adorned with a red “A.” How will Olive navigate the raging waters that she has created? That is what makes Easy A work so brilliantly. There are few films in 2010 that are as smartly crafted and executed as Easy A. By the end of the film, Olive’s story resolution is so masterfully polished it becomes clear that the audience has just been treated to a film bursting with great writing, talented actors and a finely tuned director.

Director Will Gluck’s film is unlike any high school set film you have ever seen. In fact, the feel of the film is completely new and invigorating to audiences that have frankly, seen it all. Immediately from the opening credits, it is obvious this is a groundbreaking film. 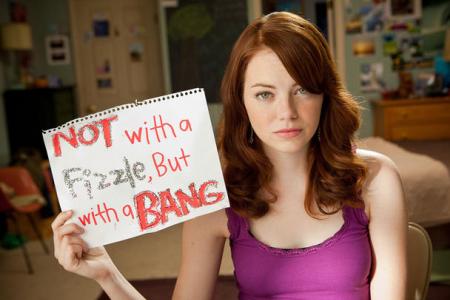 The soundtrack is a must. Emma Stone’s performance is pitch-perfect. The supporting cast shines. There you have it: Easy A is a delightful surprise that stays with you long after the credits have rolled. Don’t miss this movie.

Read on for more Easy A