Singer LeAnn Rimes says she cheated because she was tired of her husband. 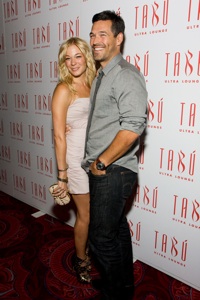 LeAnn Rimes, who ruined not only her own eight-year marriage but an entire other family when she got it on with then-married father of two Eddie Cibrian, gave the old “we grew apart” line to explain her adulterous ways.

The singer told Shape she and ex Dean Sheremet simply married too young. “It wasn’t a fulfilling marriage for either of us,” she told the magazine. “As we got older, we grew apart.”

So why did she cheat instead of, say, go to marriage counseling or even on vacation to talk like a normal, sane person with integrity?

If it counts for anything (which it doesn’t to Eddie’s ex Brandi Glanville, we’re sure) LeAnn isn’t proud of herself.

“I understand why people are disappointed in me, especially since I grew up as America’s sweetheart,” Rimes said. “I think any relationship is hard to get out of, and I don’t think the way I did it was right.”

“I did one of the most selfish things that I possibly could do, in hurting someone else.”

LeAnn Rimes’ ex Dean Sheremet isn’t buying her little act of contrition. He says he thought their marriage was okey-dokey and was totally sucker-punched when photos of LeAnn and Eddie sneaking around surfaced in the press.

“Age had very little to do with why we got divorced,” Sheremet told Us Magazine. “I was very content and satisfied. I put myself on hold to funnel all my creative energy into her career and our marriage. I was willing to make the sacrifices necessary to have a successful marriage and further her career. I knew, and know, her better than anyone in this world.”

“I was blindsided and shocked that she of all people would do this to the closest person in her life.”

Even the infamous Wendy Williams has weighed in on LeAnn’s little self-serving rationalization, calling the whole thing “sloppy” and stating that LeAnn shouldn’t call Cibrian’s kids “my boys” when she destroyed their family. “The boys have a mother, and her name is Brandi [Glanville],” Williams said.

“All I know is Wendy Williams done pissed my mamma off! I don’t wanna be in her path. To say, ‘I’ve reserved myself a place in hell?!’ I’m incredibly disappointed to see someone with that kind of platform use it for such negativity and could be so mean and judgmental about a situation they know nothing about…I don’t like how it happened either, said it a million times, but this is out of control.”

The fact is, LeAnn Rimes and Eddie Cibrian cheated on their spouses. If they don’t want to be called out for bad behavior, then don’t behave badly. What are your thoughts?