Jon Stewart rally announced for October 30 in Washington D.C. as a way for level-headed Americans to protest. 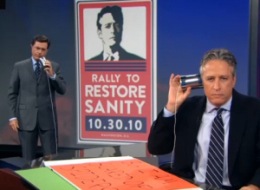 The Daily Show host Jon Stewart announced his plans last night for a ‘Rally to Restore Sanity’ on Oct. 30 in Washington D.C.

The Comedy Central funnyman is planning the event to encourage U.S. citizens on all sides to “take it down a notch” and give “the 80 percent of the country who usually have (stuff) to do” the opportunity to protest for sanity.

The ‘Million Moderate March’ is a play on conservative talk show host Glenn Beck’s ‘Restoring Honor’ rally held last month on the anniversary of Martin Luther King Jr.’s ‘I Have a Dream’ speech on the National Mall.

“We are gonna do this.” Stewart assured his bewildered audience. “The forms have been filled out, the checks have been written.”

Not to be outdone, Stephen Colbert interrupted Stewart’s announcement to announce his own rally. Later, on his own show, Colbert said his rally will be held the same day, in the same spot. Colbert said the purpose of his ‘March to Keep Fear Alive’ is to “fight Jon Stewart’s creeping reasonableness.”

It sounds like Comedy Central’s publicity stunt is the real thing, with promises of special guests and other surprises.

No doubt we’ll hear a lot about this in the weeks leading up to the big events. If the popularity of these two comedians is any indication, both rallies are sure to draw thousands.

Will you be there?