The Sopranos writer Terence Winter and director Martin Scorsese go back to the birth of gangsters with HBO’s Boardwalk Empire. Picking up on the eve of Prohibition, the highly anticipated drama takes on the glitz, glam, violence and corruption of Atlantic City in the 1920s. Steve Buscemi’s Nucky Thompson is at the center of it all, but what’s all the hoopla about? 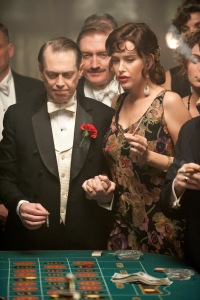 Mixing a rich history with creative fiction, Terence Winter takes on an era that changed America. With the country in a state of flux and going legally sober, Atlantic City was a booming playground right on the water, making it the prime spot for the rum runners to get into business.

“I was always interested in the 1920s and the gangster world in general,” sets up Terence Winter. “But toward the end of The Sopranos, HBO came to me with a book that Mark Wahlberg and his partner Steve Levinson had optioned, Boardwalk Empire. They said, ‘Why don’t you read it and see if there’s something in there that feels like a series to you,’ and literally on the way out the door, they said, ‘Oh, and by the way, Martin Scorsese is attached to this if you find a series there.’ I said, ‘I assure you I will find a series here!'”

Inspired by both real Atlantic City history and local legend Nucky Johnson — not to mention a chance to work with Scorsese — Winter delivered. He came up with a new series built around fictionalized centerpiece, Nucky Thompson.

“This was a guy who was just incredibly conflicted, equal parts politician and gangster,” Winter said. “Then coupled with the massive changes going on in 1920 — Prohibition, women’s vote, broadcast radio coming in, World War I just having ended, the ’20s about to boom — it was just this incredible palette from which to draw stories and characters. It was just irresistible.” 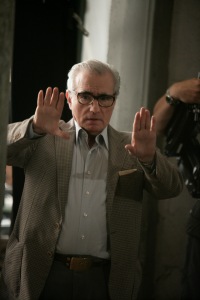 Steve Buscemi was instantly won over by his character Nucky, the Atlantic City treasurer who finds himself in the center of the alcohol trade when Prohibition hits.

“This is one of the best parts I’ve ever had in my life,” Buscemi raved. “It’s just so exciting for me to go to work and know these scripts are so strong and to play a character who is ambitious. He certainly has a dark side, but there’s a lot of humor that goes along with it. He genuinely has a good heart and wants to share the wealth and help people. He likes being a politician, and he likes being a leader, but he is presented with this opportunity with Prohibition, and you’re either on the trolley, or you can be put six feet under.”

With Scorsese directing the pilot and a cast that includes Kelly Macdonald, Michael Pitt, Michael Stuhlbarg, Dabney Coleman and Michael Shannon, the action starts with a serious bang this Sunday at 9 p.m. on HBO.