Bravo and Top Chef took season seven to Washington D.C. and Wednesday night they hailed to their own top chef. Kevin turned his culinary dreams into a reality as he took home the title of top chef and $125,000.

During Bravo’s Top Chef finale, the cheftestants were whisked away to Singapore for the first ever international challenge. The final three, Kevin, Ed and Angelo, were then teamed up with past Top Chef winners Michael Voltaggio, Hung Huynh and Ilan Hall. 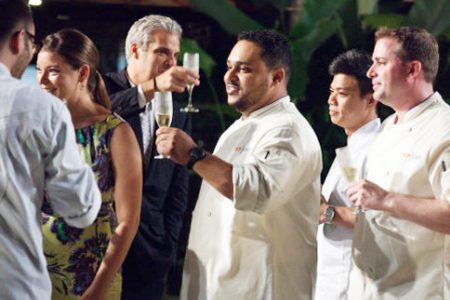 Angelo was paired with Hung Huynh and was immediately confident because of their similar styles. Kevin was excited to work with Michael Voltaggio and Ed wasn’t really sure what to make of Ilan Hall.

To take home the prize, each of the chefs had to prepare a four-course meal made up of a vegetable, fish and meat course and ending with dessert. To make matters worse, judges Tom Colicchio and Eric Ripert threw a wrench into the contestants’ plans by choosing their proteins from a Singapore market for them — each had the same to work with but it was not their choice.

Of course, with team challenges, drama isn’t always far behind.

Angelo apparently became stricken with a stomach bug that prevented him from prepping his meal on the first day. Really, you’re in the finals of Top Chef and you can’t get out of bed? For $125,000 I would have crawled. 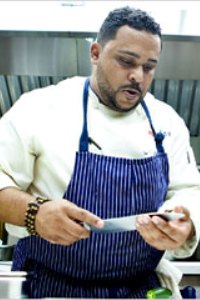 Fortunately, Hung Huynh pulled through and carried the workload for Angelo by communicating through the phone. In a nail-biter, Angelo made a miraculous recovery and returned the next day to prepare his last meal.

Tom Colicchio, Padma Lakshmi, Gail Simmons and Eric Ripert judged the final three fairly but sternly. The finalists excelled in some courses while sinking in others.

Ed’s dessert course, which resembled a basic chocolate cake, was too simple but his corn dish was a hit. Angelo lost points for his overcooked duck dish but sailed with his mushrooms. Kevin cooked his duck to near perfection and his biggest failure was just a tad more seasoning in his noodles. It could have gone either way.

In the end, Angelo and Ed were asked to pack their knives and go. Kevin, the dark horse of the season was named top chef and received the $125,000 prize.

Check out each of the contestant’s four-course meals below, and tell SheKnows which Top Chef contestant you thought was best.