Michael Grimm topped Jackie Evancho on America’s Got Talent and we were there for the big moment. SheKnows caught up with Grimm, Evancho and Prince Poppycock, plus Nick Cannon, Jewel and the judges. Don’t miss the SheKnows red carpet videos and more, live from the America’s Got Talent finale!

A season of America’s Got Talent performances led up to a Michael Grimm fairytale moment and up through the final minutes, the tension at CBS Television City was palpable. 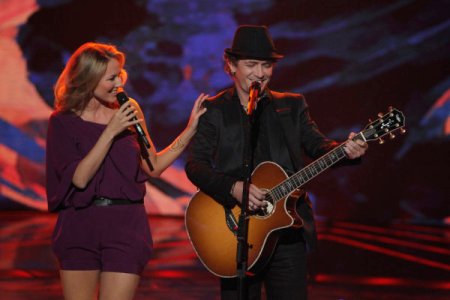 “You get so pulled in,” Sharon Osbourne said. “I was all sweaty palms, fidgeting, ‘Who is it going to be!?’ It’s the best thing in the world! But when it comes to the last four, they’re all going to go off and have great careers. They’ve all had the same attention and opportunities…except only one gets the million.”

Most viewers expected that the one to beat was ten-year-old opera sensation Jackie Evancho. “It was definitely shocking,” host Nick Cannon conceded. “I called it last night, but I didn’t think I was going to be right.”

America’s Got Talent judge Howie Mandel, however, called it the first time Grimm took the stage.

“I’ve never wavered,” Mandel boasted. “He is the whole package. He has what appeals to the widest range of people. Jackie Evancho is certainly a phenomenon and amazing. Her talent is inexplicable, but how many young girls were voting to see a ten-year-old opera singer?” 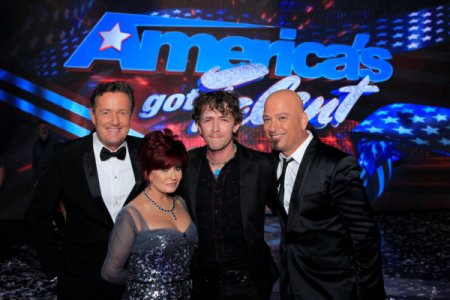 Michael Grimm, on the other hand, didn’t see it coming. SheKnows was the first publication in the world to get face time with the Mississippi crooner after he won and he was clearly still dazed by the news.


“I can’t even believe what’s going on right now,” Grimm gasped. “I never planned on winning. I was just hoping I’d make it onto a couple of shows. I’m used to singing in lounges, small bars and restaurants. To be here…I’m losing myself right now.”

SheKnows asked winner Grimm, why AGT and not American Idol? “American Idol is not just the name of the show and I’m not the American Idol,” he said. “I’m not a pop singer, a top forty singer. I came to this show so I could do what I do and they allowed me to do it all the way through. I couldn’t ask for anything better.”

SheKnows has exclusive video of Grimm, Evancho, Poppycock, Jewel and Morgan, but first, a few random tidbits from the carpet:

Osbourne tried to tell SheKnows she was nervous about her new show, The Talk, which hits CBS October 18. We couldn’t imagine anything making that diva nervous — and we were right! “I’m not, but it sounded good,” Osbourne admitted with a laugh.

Piers Morgan is also preparing to get into the talk game. Just because he’s set to take Larry King’s seat at CNN, however, doesn’t mean he plans on giving up his seat on America’s Got Talent. “Unfortunately for you, I will be back,” Morgan teased. “Will it be strange to go from interviewing President Obama one minute to Prince Poppycock the next? Nah. They’re all human beings, aren’t they?”

Up next…Prince Poppycock pops in!