The final four contestants on America’s Got Talent, Prince Poppycock, Michael Grimm, Jackie Evancho and Fighting Gravity, performed for the judges last night in hopes of wowing the voting audience one last time before the winner of season five is chosen.

The flamboyant Prince Poppycock turned in another impressive performance on America’s Got Talent with Nessun Dorma, which judge Piers Morgan apparently didn’t like, as he buzzed him. Sharon Osbourne, on the other hand, gave him a standing ovation, as did the audience. Piers explained Prince Poppycock took himself too seriously and didn’t have enough fun, which has been his signature thus far. 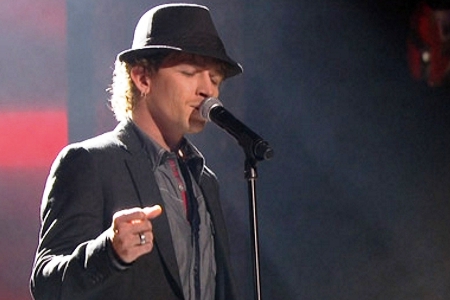 Accompanied by his guitar this week, Michael Grimm crooned When a Man Loves a Woman, which garnered a standing ovation from the crowd and all three judges. Sharon Osborne told him it was a perfect song with a perfect delivery and Howie Mandel predicted Michael would win the competition.

Little Jackie Evancho gave another powerfully operatic performance, with her rendition of Ave Maria, which also brought the entire room to its feet. Piers Morgan felt Jackie Evancho would be named the winner, calling her performance perfection.

Fighting Gravity gave another entertaining performance, but didn’t seem to wow the judges as much as Michael Grimm or Jackie Evancho. Piers Morgan felt they would make it as an act in Las Vegas regardless, but said they made a critical error, which revealed the-man-behind-the-curtain, taking away some of the mystery. Sharon Osborne disagreed thinking they were fabulous and Howie Mandel was equally complimentary, they just weren’t as impassioned as they were about the other acts.

Tonight’s results will reveal the winner of America’s Got Talent sending one of these contestants to Las Vegas to headline their very own show. But since they have quite a bit of airtime to fill up, the audience will first be treated to duets by Jewel and Michael Grimm, Sarah Brightman and Jackie Evancho, Donna Summer and Prince Poppycock and Lionel Richie and Fighting Gravity. The finale will also feature Usher, Cirque du Soleil, David Copperfield and the Goo Goo Dolls.

Tune in to NBC at 8 p.m. to find out if your favorite act will be chosen as the next winner of America’s Got Talent.