In tonight’s sneak peek premiere of Jimmy Smits’ Outlaw, a case inspires conservative Supreme Court Justice Garza to shed his cape and step down from the bench to get back into the ring. Armed with insider knowledge, Smits, the gambling womanizer, vows to take on the nation’s biggest and most controversial legal cases and make a difference. 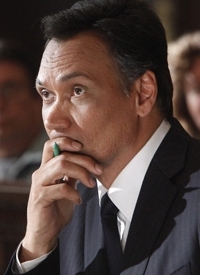 Fans who think they know what to expect from a Jimmy Smits vehicle may want to tune into tonight’s sneak peek of Outlaw on NBC. Judge Cyrus Garza has Smits’ swagger and good looks, but this is a whole new game for the veteran actor and one of our picks for fall’s top shows.

“It’s a wonderful meal for an actor to play and it’s something different than what I’ve done before,” star and co-executive producer Smits said. “I’m going to be able, as an actor, to tackle stuff that’s very substantive and play a character that’s much more loose and comfortable than I’ve had a chance to play. It’s a challenge for me and I can’t wait.”

His character, Cyrus Garza, climbed to the highest court in our nation and landed a coveted lifetime appointment. He’s earned a rep as a guy who believes in the letter of the law, but the case before him in the premiere will shake his beliefs to the core.

Forced to admit the system is flawed, the playboy gambler decides to step down to fight it. It turns out, his father was a liberal hell-raiser and Garza has a bit of that in him too.

“Because of what happens to him in the pilot, this jurist has made such a radical switch and then surrounds himself with a team of people that have different types of political viewpoints,” Smits previewed. “We’re at a point [in America] where we’re logger-jammed in terms of the political right and left, and this was an opportunity to deal with legal matters and hot-button issues that are substantive in terms of a legal show but, at the same time, have a character that is outside the box in a lot of different ways.”

Tonight’s sneak premiere airs at 10 p.m. In spite of less than stellar reviews, NBC hopes Smits’ appeal will still draw viewers away from Top Chef and LA Ink. At least it’s not going up against the Survivor premiere!