Survivor returns to take on the rain forest of Nicaragua tonight. Survivor: Nicaragua is the show’s 21st season and pits the under-30 contenders against a tribe of over-40 elders. This may sound unfair to the elders, but they have a not-so-secret weapon: Former Dallas Cowboys Super Bowl-winning coach Jimmy Johnson. The question is, will that work for them?

Survivor makes a move to Wednesday nights this season and 20 new castaways are ready to start playing, scheming and teaming up for immunity, gifts and the ultimate $1 million prize in the sticky heat of Nicaragua. 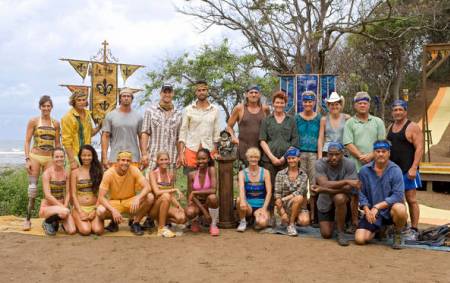 This year’s Survivor contenders include a Jeff Spicoli-type, a serious contender with an artificial limb, a hunky fire captain, a chatterbox, a pretty boy, a slick schemer, two very different New Yorkers and a bubbly go-getter.

Fans can expect the requisite host of pretty young things and players who spend their days in the real world doing everything from goat ranching to real estate to studying. The youngest player in the game is 20-year-old Kelly, a nursing student.

The oldest contender is 67-year-old retired NFL football coach Jimmy Johnson. With the show dividing the teams by age this year, Johnson is the one contestant already making the news. Word is, he signed on for the adventure, but doesn’t expect to win.

One would think having the former Cowboys coach in the Survivor mix would give the elders an edge, but it sounds like that may not turn out to be the case.

“The Old were unpredictable in that they argued a lot and there was conflict about who should lead and how they were leading,” host Jeff Probst said. “I was really surprised that somebody didn’t say, ‘What are we doing? We’re all adults! Let’s go kick their ass…’ They fought more than the young tribe did.”

He was less surprised by the kids.

“The Younger were predictable in that they had a good time,” Probst said. “They laughed a lot and flirted.”

In addition to this battle of the ages, the new season introduces something called the Medallion of Power, a weapon to be used during immunity challenges that will shift back and forth between the teams after each use.