Top Chef: Just Desserts isn’t all whipped cream fun and marshmallow wishes. The new series based off the wildly popular Bravo hit, Top Chef, will feature the obvious, desserts, but will also differ in how the decadent after-dinner bakers handle the kitchen. 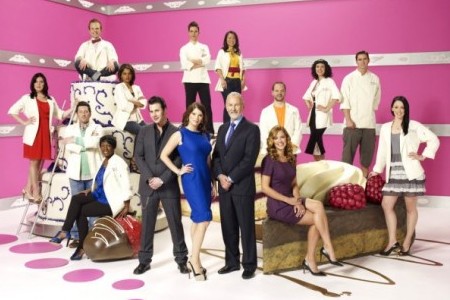 According to host, Gail Simmons, bakers are calculating creators so there’s bound to be some controversy and tears — and of course divine desserts. “Pastry chefs are so precise and so exacting that it really does come out in their personalities,” Gail Simmons, who also serves as a Top Chef judge, explained.

“And they’re artists, so with that comes a lot of drama. I mean, there’s a lot of strategy and sabotage, and what’s amazing is that desserts sort of lend themselves to that because they’re so delicate and so fragile that you kind of have to guard them with your life or else it all could be lost.”

Beyond the standard comparisons to Top Chef, Top Chef: Just Desserts will also feature the same Quickfire and Elimination Challenges as its companion piece. One big difference? The challenges will hone in on the ingredients used to create desserts rather than just a theme.

The new show will also follow the same host and judge format. Gail Simmons will assume the Padma Lakshmi role and master pastry chef Johnny Iuzzini will take on the challenge of head judge — aka Tom Colicchio.

“Johnny doesn’t have as many years in the kitchen as Tom Colicchio, but Johnny is sort of a wunderkind,” Simmons assured. “And he happens to be super attractive and very stylish.”

With desserts, many times there is no second chance to redo the dish. The element of stress is higher than ever according to Gail Simmons.

“Recipes for pastry are down to the microgram. There’s no fixing it if you make a mistake. Once you put it in the oven to bake, it’s done. And if your measurements are not exact, it will not work,” Simmons said. “So they added such an extraordinary level of tension to the challenges that we’ve never seen before on Top Chef.”

Added Simmons, “It is about sugar and butter and jams and jellies and fruits and chocolate and caramel and butterscotch and height and sculpture and artistry. Every challenge is so diverse. And it’s just sort of like a wonderland. It was endless.”

Take a bite of Top Chef: Just Desserts when it premieres September 15 at 10 p.m. on Bravo. But don’t get too comfortable — on September 22 the reality show switches to its regular time at 9 p.m.