Eminem and Jay-Z, along with a few special guests, packed the house at the new Yankee Stadium on September 13. The performance was part of their Home and Home mini-tour, which also included a September 2 stop at Eminem’s hometown in Detroit at Comerica Park. 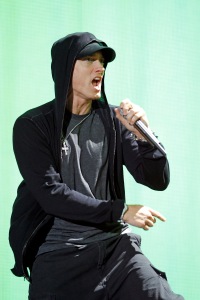 For Jay-Z’s hometown leg of the tour in the Bronx, New York, Eminem took to the stage first. He thrilled the audience with a few favorites before bringing out a couple of friends, including his group D12, B.o.B, and 50 Cent, who performed In Da Club with G Unit.

To top his set off, Eminem welcomed his mentor and producer Dr. Dre, who wowed the sold-out crowd with Still D.R.E. and Nuthin’ but a ‘G’ Thang. The Detroit rapper then concluded with hits Without Me and Lose Yourself.

Jay-Z followed up Eminem’s crowd-pleasing performance by bringing Kanye West on stage for Run This Town and West’s Power Remix. The duo then had Nicki Minaj join them for Monster.

After Kanye’s contribution to the show, Swizz Beatz popped on stage for a bit and then later, Coldplay’s Chris Martin (whose wife Gwyneth Paltrow was also in attendance) accompanied Jay-Z for Heart of the City. Martin then stuck around to play Clocks as Jay-Z rhymed Most Kingz. Martin also treated the cheering crowd to a little Viva La Vida. 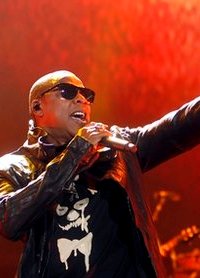 Of course, Eminem and Jay-Z came together for a duet of Renegade and then the show continued with Drake and Jay-Z performing Light Up. Since so many stars joined the show, it shouldn’t have been too big of a surprise to see Jay-Z’s wife Beyonce grace the stage, as she did for Young Forever. The show then wrapped up with Jay-Z’s tribute to his hometown: Empire State of Mind.

After that lineup and intense performance, a repeat doesn’t seem possible, but we’re pretty sure Jay-Z and Eminem are up for the challenge as they take the stage at Yankee Stadium again tonight.